Join us for our Live Stream Sunday Mass at 9am 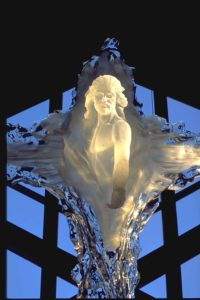 The Cross of New Life is a unique and inspiring work of art which graces the worship space of Holy Family Parish. It measures 12 feet by 16 feet, weighs almost 2,000 pounds, and is suspended over the altar steps where much of our sacramental life takes place. Using the sculpting medium acrylic, the Cross of New Life captures and reflects the light streaming through the magnificent windows of the church, suggesting the five elements of earth, fire, light, water, and air. It speaks to us in a most eloquent, yet simple manner of our relationship with our Lord Jesus Christ, our Savior and our Friend.

The outstretched arm reminds us of His invitation all of us to make Him, “the Christ,” the all encompassing focal point of our lives. The rays of His RISEN presence surround Him in the form of a cross. The Cross of New Life is an instrument of evangelization and is a tangible sign of Holy Family’s mission to all who come here seeking compassion, understanding, acceptance, and love of the Lord and one another.

The History of the Cross of New Life

In 1985 Holy Family’s founding pastor, Father Med Laz, along with the Building and Finance Committee, presented the drawings, blueprints and plans for the church and building of Holy Family to Cardinal Bernardin for his approval. It was at that time His Eminence expressed that it would be fitting to have a significant work of art displayed in the church.

Father Laz had envisioned such a work and discerned the “cross” as being of special significance to fit Holy Family’s sanctuary. He and the Art Selection Committee deliberated on the form the Cross should take, as well as the artist that would be chosen to convey the spirit of the parish. They sought an artist who could sculpt a Christ figure breaking loose from a very free-formed cross, reaching out with compassion to everyone.

The medium chosen was clear acrylic, so as to take advantage of the light streaming through the large church windows. Much deliberation and experimentation yielded the 16’x12’ dimensions suitable for the church. This would be a great challenge, for it would be the largest acrylic art piece ever attempted.

The search for an artist began by advertising in art periodicals. Some 300 responses were received and reviewed, but no one seemed able to envision the concept the Art Selection Committee sought. While on a trip to Florida, Father Laz saw several bronze sculptures in a gallery that inspired him to seek out the artist. His search led him to Nevada City, California and the artist, Ernest Caballero. His work was represented in galleries across America. Correspondence with Ernest led to an invitation to visit Holy Family. Ernest met with the Art Selection Committee, visited with parishioners and attended Holy Family liturgies. Soon after, Ernest was selected as the artist for the cross.

At this time the engineering firm of DeStafano & Partners was hired to see the project to completion. They designated Mr. Ed Windhorst from their firm to work with Holy Family.

Ernest first completed a 33-inch model of the large cross. On Ash Wednesday, 1994, Father Laz visited Cardinal Bernardin and showed him the 33-inch model. The Cardinal expressed several times how much he liked the model.

Now at his home and studio facing the forest in the Sierra Nevada Mountains, Ernest began crafting from clay this large cross. The work environment was so large that a special plywood structure had to be constructed.

Around this time Father Laz left Holy Family Parish and went on a writing sabbatical. In November 1994, Father Pat Brennan was named the new pastor of Holy Family, and was challenged to see the artwork through the rest of its journey.

Soon after, the Art Selection Committee and parish leadership came to a consensus on naming the Cross; a name suggested by Father Brennan. How appropriate that the founding pastor would conceptualize what his successor would name: The Cross of New Life.

In 1995 the Pastoral Council initiated a New Millennium Campaign, a building pledge drive to cover the needs of a parish that continued to grow. Part of this campaign was to purchase additional liturgical art, including The Cross of New Life.

The New Millennium Campaign at the time, had two components, the Building and Cross Pledge Drives, kept separate for those who might want to give to one, or the other or both. These two campaigns are now separate. Nonetheless, creative financing allowed parishioners to donate $10,000 and receive one of 30 Artist Proof 33-inch models or $5,000 to receive one of 300 Numbered Series 33-inch models. The small statues were made available to pay for the large Cross. Father Pat Brennan also added that after all large Cross expenses have been met, 10 percent of all moneys pledged would be donated to the Catholic Church Extension Society. All other excess funds will go toward the Building Campaign.

In May of 1996 Father Brennan visited with Ernest in Nevada City, California, to view and approve the final clay sculpture. That same month, Mario Noto of Fine Arts Acrylic in New York met with architect Ed Windhorst and Holy Family’s parish leadership. They reached agreement for Mario and his company to fabricate the acrylic Cross. By August the Cross of New Life had become a major ministerial effort, with many more parishioners becoming involved in one way or another. Within three months the use of an autoclave with Lockheed-Martin Aeronautical Systems was secured, and the project stepped into high gear. Lockheed’s soon-to-be-announced, pending closure of the autoclave put a sense of urgency into the project.

Fine Arts Acrylic created the 17’ x 14’ x 6’ mold from Ernest Caballero’s real-size fiberglass sculpture. The mold and acrylic components, along with Mario Noto and Fine Arts Acrylic, arrived in Charleston for the first casting in early February, 1997. An acrylic casting of this magnitude had never been attempted, let alone been successful. This was the cutting edge of acrylic art. That first casting achieved some success; no bubbling or crackling. There were two major concerns, however. The technique used for the casting of the 33-inch model proved deficient in the casting of the large sculpture. Second, shrinkage, gravity and extreme heat caused distortions in the sculpture. It was not satisfactory. An attempt at a second casting was agreed upon in order to address these problems. In late February, this casting was complete but still lacking in some aspects. Ed Windhorst of DeStefano & Partners examined the structural integrity of the piece; Ernest Caballero, the artist-creator of the sculpture, buffed off some casting lines on the sculpture; and Ellie Muehl from Holy Family’s Art Selection Committee judged its artistic quality. Instructions were given to Mario to experiment with corrections for review in April.

Father Brennan and Cross of New Life parishioner leadership visited New York in early April, and with Mario, determined to proceed with corrective work at the autoclave. Arrangements were made and by May, the Cross left the autoclave for the last time—two weeks before the final closing of the Charleston plant.

Once back in New York, the Cross would time-cure before work could go forward in late June, 1997. Ed Windhorst, with his specialists in drilling and suspension, joined a local rigging firm in New York to bore the cone-shaped suspension sockets into the Cross and test hang it for a two-week period. The results couldn’t have been better.

In July of 1997, parishioner Ellie Muehl returned to New York. She carefully inspected the sculpture and judged it to be of the art quality necessary for completion. The Cross was returned to Mario’s studio for the last phase of polishing and preparation for the final step—installation at Holy Family.

On Thursday, September 18th, 1997, the Cross of New Life arrived at Holy Family. After being transported from New York on a large flat-bed truck, the Cross was immediately inspected to determine if the long trip had done any damage. The Cross was beautiful. Two large portions of the east church windows were removed, and the Cross was hoisted off the truck and into the building. Amidst hundreds of curious onlookers, ironworkers and the engineering firm of DeStafano & Partners spent the remainder of the day securing the Cross to cables and raising it into position. Local media were on hand to capture the exciting event, and parishioners watched the activity in the church into the evening.